INDIANAPOLIS – Just as Indiana is set to roll out the red carpet for the NCAA Men’s Basketball Tournament, newly-available data and stories reveal that increased evictions following the General Assembly’s enactment of SEA 148 could lead to a spike in COVID-19 spread that would endanger both Hoosiers and the tens of thousands of visitors to the state. The week after the new law became effective on February 17, Indiana saw a spike of 1,288 new eviction filings, the largest one-week number since the CDC moratorium took effect in September 2020. New data from EvictionLab shows that evictions are concentrated around the very sites where the NCAA Tournament will be played.

SEA 148, made effective by the General Assembly by overriding Governor Holcomb’s veto, allows seven new forms of ‘emergency possession’ which result in expedited three-day evictions, as well as codify loopholes in renter and retaliation protections. These newly-allowed rapid evictions include rent non-payment, as well as when compliance with code requires the tenant to vacate the premises, as valid reasons. Most alarmingly, this means tenants could be evicted for reporting code violations and poor conditions.

Stories collected by the Hoosier Housing Needs Coalition at Housing4Hoosiers.org detail renters’ experiences with mold, unsafe wiring, and even infestations of bats. Reporting these concerns could potentially now be used as legal excuses to evict renter families with only three days’ notice, exchanging their poor living conditions for homelessness almost overnight. 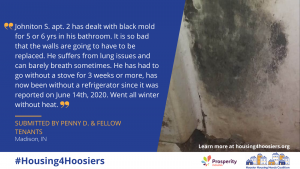 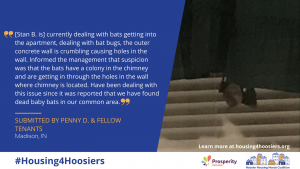 In addition to the newly-allowed rapid evictions, SEA 148 further undermines housing stability by allowing anti-retaliation protections to be waived away in boilerplate form leases and locking in the lowest level of housing standards statewide.

Newly-released data from Princeton’s EvictionLab reveals that Indiana already has over 34,000 evictions since the COVID-19 public health emergency began, nearly 24,000 of which have been filed since the CDC’s moratorium began on September 4. Indiana has by far the largest number of evictions in EvictionLab’s COVID-19 Eviction Tracker, nearly double the next-closest state. 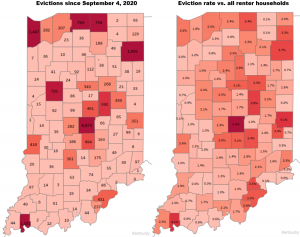 Evictions contribute to COVID-19 spread wherever they occur when families are forced to double-up and couch surf or gather in overcrowded homeless shelters where they cannot follow CDC guidelines. And while heightened COVID-19 evictions are occurring in all regions of the state, they are concentrated in the three counties where the NCAA tournament will be hosted, all of which have also seen community-specific landlord-tenant laws nullified by SEA 148.

“As all eyes zone in on the Hoosier state, and watch to see why all of March Madness was moved here, it’s almost inconceivable that the worst parts of the ‘eviction bill’ have not yet been cleaned up. How can we extend our highly touted hospitality to these outside teams and tourists while essentially putting more and more of our fellow Hoosiers out on the street? This is a game plan that spells immediate disaster for our public health and our public image and short- and long-term devastation for our neighbors’ housing stability,” said Jessica Love, Executive Director of Prosperity Indiana and Hoosier Housing Needs Coalition member.

“We urge the Indiana General Assembly to invoke the common sense that Hoosiers are also known for and immediately institute remedies to the expedited evictions and diminished renter protections that are now law in SEA 148. The solutions have already been drafted as bipartisan amendments to HB 1541, the ‘trailer bill’ sitting in committee. We only ask that all parties be brought together to ensure the legislative session – or better yet, March Madness – doesn’t end before common-sense remedies are implemented.”

About the Hoosier Housing Needs Coalition:

Hoosier Housing Needs Coalition (HHNC) was formed by members of Indiana’s housing security advocacy community in April 2020 to support advocacy and education related to housing and homelessness prevention in response to the COVID-19 pandemic. Staffed by Prosperity Indiana through advocacy and coalition building grants from the National Low Income Housing Coalition and the Central Indiana Community Foundation, HHNC convenes partners from across Indiana to advocate for immediate, medium- and long-term housing stability policy solutions and conduct education and research to achieve federal, state, and local policies for an equitable response and recovery to the pandemic and beyond.

Download your free copy of Renting in Indiana: A Handbook for Tenants and Landlords