INDIANAPOLIS – The Hoosier Housing Needs Coalition thanks Governor Holcomb for signing HB 1541 into law. Its passage remedies two problems created when SEA 148 was enacted into law in February. But with several other outstanding dangers from SEA 148 left in active law, including seven new forms of expedited 3-day evictions and loopholes in tenant protections, the Coalition finds much work is yet to be done to shore up housing stability that has been shaken during the ongoing pandemic. 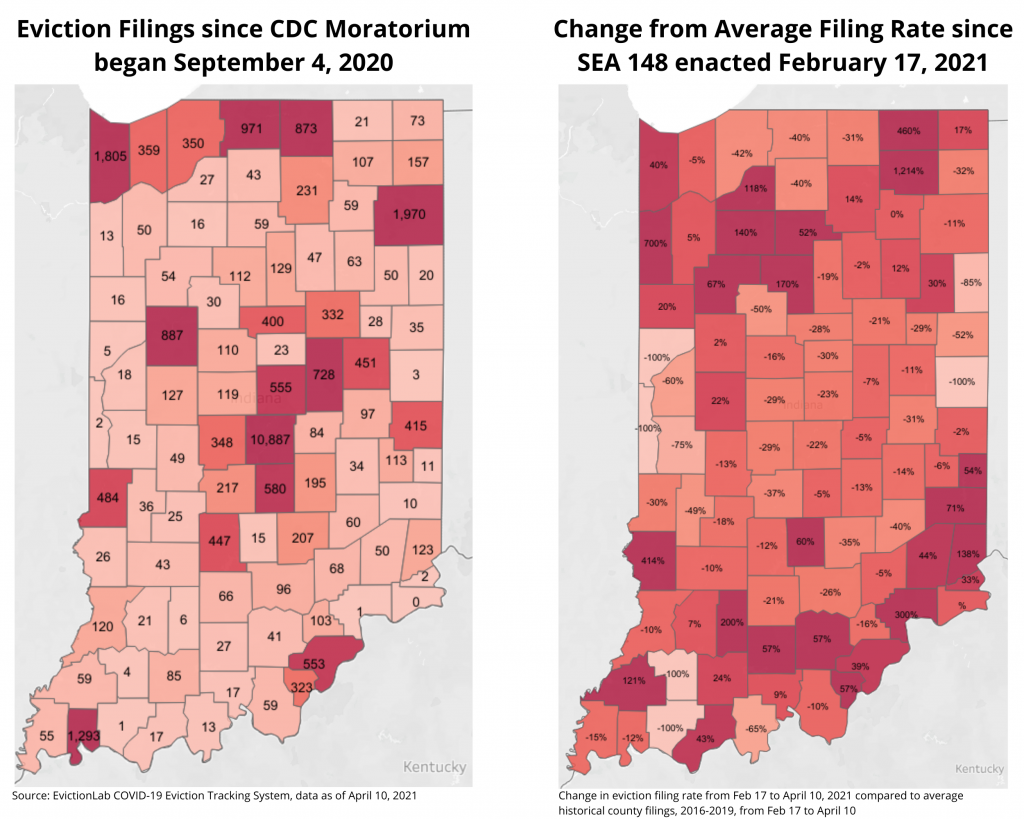 The Coalition is grateful that the General Assembly heeded our call to eliminate a landlord’s ability to ‘contract around’ anti-retaliation guarantees for tenants. Because form leases are generally ‘take it or leave it’ and are not up for negotiation, adding a provision to SEA 148 via HB 1541 that says the anti-retaliation language cannot be waived in any instance was necessary. Now, even by signing a written contract, residents cannot be stripped of their legally-protected rights against retaliation via a waiver clause. In addition, HB 1541 removes the broad provision in SEA 148 that nullified and preempted local ordinances that address “all other aspects of the landlord-tenant relationship” beyond those named in the law. Members of the Coalition pointed out these problems, among the others in SEA 148, when the language was first introduced as part of SB340 in February 2020.

“We are sincerely grateful that some of the most heinous elements of this bill have been addressed in this ‘trailer bill’ 14 months later,” said Jessica Love, Executive Director of Prosperity Indiana and a coalition member.

“However, despite bipartisan support for amendments proposed in committee and on the floor of the House and the Senate, HB 1541 did not address several glaring problems that remain law in SEA 148 and continue to pose an immediate threat to the 30 percent of Hoosiers who rent their homes.”

The coalition cites the most dangerous aspects of what remains of SEA 148 as being expanded emergency possessory orders, including instances when the tenant is not at fault. SEA 148 introduces seven conditions when so-called emergency possessions can result in expedited 3-day evictions. These go beyond the previous limited use of emergency possessions – to mitigate damage to the unit – and now include rent non-payment, and when compliance with code would require the tenant to vacate the premises. In effect, this means tenants can now be quickly evicted for reporting code violations and poor conditions. The Coalition has gathered stories of these violations and poor conditions that will be further enabled by the General Assembly’s failure to address expanded emergency possessions through HB 1541.

While it is unknown whether these new emergency possession powers have been used since SEA 148 became law on February 17, they were enacted at a time of accelerating eviction filings. According to EvictionLab’s COVID-19 Eviction Tracking System, nearly 40,000 evictions have been filed in Indiana since the COVID-19 public health emergency began in March 2020, despite the state and ongoing CDC moratorium. The rate of evictions filed since SEA 148 became law on February 17 is only 14.2 percent below the pre-pandemic average statewide. And in 35 counties, mainly in less-populated counties and those hit hardest by the pandemic, eviction filings have been above pre-pandemic rates since SEA 148 became law. So while a bipartisan group of legislators expressed interest in addressing SEA 148’s new forms of expedited eviction powers in HB 1541, Indiana’s 793,086 renter households will remain vulnerable until at least 2022, because the additional measures were not taken up.

In addition, diminished renter protections and loopholes in retaliation language made law in SEA 148 will persist. By not addressing these issues in HB 1541, tenants are now only protected from retaliation for reporting code violations that ‘materially’ affect health and safety. That means, if a tenant reports a code violation and a judge decides it is not ‘materially affecting,’ no protection from landlord retaliation is afforded to the tenant. Tenants are also only protected from retaliatory eviction if they provide a written complaint, even if may have verbally complained repeatedly or cannot reach an absentee landlord by writing.

Also, while landlords are not allowed to increase rent in retaliation, they can do so, if the rent is increased to comparable market rent. However, the coalition suggests that an increase in rent that comes after a tenant files a complaint should only be considered non-retaliatory if rent increases equally for all tenants. Additionally, tenants are not protected when initiating or pursuing court or administrative proceedings, unless they testify in those proceedings.

Beyond these short-term dangers, HB 1541 failed to address the fact that SEA 148 brought the standard of landlord-tenant relationships to the lowest common denominator. SEA 148 voided existing local ordinances in eight different areas, including local regulation of screening process for rentals, disclosures concerning the property, lease, or rights, and responsibilities of the parties in a landlord-tenant relationship. By removing local governments’ ability to address the fact that Indiana has some of the highest numbers and rates of evictions in the nation, the Assembly made itself responsible for addressing those conditions statewide. But they refused to hear proposals in committee hearings on HB 1541 that would have done just that.

Love said, “The time wasn’t right for SEA 148 when it was first passed and thankfully vetoed at the start of COVID last year. It wasn’t right when the veto was overturned this year. And now, only seeing a partial fix to the worst parts of the law through HB 1541, allowing new retaliation tactics to persist, the law will continue to endanger Hoosier renter households and their communities during this continuing pandemic and beyond. And Indiana won’t be able to fully recover until these housing stability problems are addressed.”

The HHNC says it brought a number of common-sense, widely agreed-upon proposals to the table that were never given an opportunity for public testimony or votes. These include fixes to the problems listed above, as well as steps to help Hoosiers who have already slipped through the cracks, included eviction record expungement, the ability to access and correct errors on tenant screening records, and problem-solving housing courts.

Indiana is listed among the top landlord-friendly states. According to the Coalition, newly expedited evictions and loopholes in protections threaten to push the landlord-tenant relationship further out of balance, just as the state is attempting to rebuild from an economic and public health crisis. The Coalition urges Indiana’s policymakers to bring housing providers, residents, and community services organizations together to fix the long-term housing issues left unresolved this session.

About the Hoosier Housing Needs Coalition:

Hoosier Housing Needs Coalition (HHNC) was formed by members of Indiana’s housing security advocacy community in April 2020 to support advocacy and education related to housing and homelessness prevention in response to the COVID-19 pandemic. Staffed by Prosperity Indiana through advocacy and coalition building grants from the National Low Income Housing Coalition and the Central Indiana Community Foundation, HHNC convenes partners from across Indiana to advocate for immediate, medium- and long-term housing stability policy solutions and conduct education and research to achieve federal, state, and local policies for an equitable response and recovery to the pandemic and beyond.

Download your free copy of Renting in Indiana: A Handbook for Tenants and Landlords